Whether it’s just tightening the screws supporting your electrical switches, fixing your new IKEA furniture or just disassembling everything your own when moving, you need a screwdriver that you can depend on. If the work is too much, the regular screwdriver just won’t cut it.  Manually screwing or unscrewing the bolts and nuts can take a whole day and leave you fatigued. But don’t worry, folks —the gods of technology have made our work easier and safer with the cordless screwdrivers.

This is a device that will go above and beyond in giving you the most convenient experience while Doing It Yourself (DIY). Once turned on, you can simply tighten or loosen screws as you desire. Meanwhile, you can do all this even when far away from an electrical outlet because these appliances are powered by the latest in battery charging technology. This also means that power blackouts won’t incapacitate your work progress.

We know one man or woman can’t do everything, even if you run a successful electrical business. This is why we have compiled for you a list of the very best cordless screwdrivers that the market has to offer.

For those who want to do DIY in the home the easy way, nothing beats Black+Decker’s LI4000. It’s powered by a 4-volt lithium-ion battery which may be on the low end of the spectrum but it can easily perform basic jobs around the house such as installing shelves and cabinets, furniture assembly, and lighting projects.

It features a 6-position clutch, a forward/reverse switch, a built-in LED light, an easy-to-read indicator window, and a magnetic tip. Even better, the screwdriver comes with 11 accessories. This Black+Decker screwdriver is a must-have tool in any household. It features a three-position handle, two-speed settings (high-speed drilling, low-speed driving), built-in LED, and the QuickConnect® drilling and driving system. The latter allows you to easily switch out bits, including some from other manufacturers. For anyone wishing to get those screws lodged within cramped spaces easily, then the Dremel GO-01 is your best bet. Coming in a compact set up, this is the e-screwdriver for the workman on the go. The powerful 4 Volt Lithium-Ion battery is juiced up using a USB charger that makes charging familiar, convenient and insanely fast.

While strong enough to drive in 2” screws, it does so at an impressive speed of 360 rpm. They couldn’t even have made it any easier to use with a slight push all that is needed to get your screwdriver going. The Hitachi DB3DL2 stands out in a sea of cordless screwdrivers because of three things. First, it is backed with a Lifetime Lithium Ion tool warranty and a 2-year lithium-ion battery warranty. That’s a lot to offer for something worth $70. Second, it comes with overload and over-discharge circuit protection to ensure a longer life. Third, it’s incredibly compact and lightweight – less than 11 inches long and weighs less than 1lb.

Other features include a 1.5Ah lithium-ion battery, a dual-position handle, a built-in LED light, 21 clutch settings + 1 drill setting, and a spindle lock to use it as a manual screwdriver. The Milwaukee 2401-22 is powerful enough to perform medium-duty driving AND drilling. It features a 12-volt Lithium-Ion battery that has a battery fuel gauge which lets you know how much run-time you still have, metal gear housing for durability, a built-in LED light and a variable speed of 0-500 RPM. The WORX WX254L is a semi-automatic power screwdriver that makes performing multiple tasks so much easier. It comes with 2 rapid reload cartridges that can each hold up to 6 bits at a time and a slide action feature that allows you to switch between different bits easily. No more wasting time looking for the right bit to do the job and then attaching it.

This cordless screwdriver also comes with a 4-volt maximum lithium-ion battery that can hold a charge up to 18 months. The Bosch PS130-2A is an absolute staple for any handyman. This 2.3-pound product is designed for use on the move being only 7.3” long and 7.1” high. It’s light but still delivers a strong performance with lasting reliability. It makes easy work of installing fittings. This is because with the hammer drill/driver kit it drives in screws, drills through wood or metal and does heavy-duty drilling through concrete.

It has a lithium-ion battery size of 12 Volts which provides an optimized runtime capable of delivering 3/8 inch auto-lock chuck. This is useful when clamping bits and drills. Not to mention, it has 20 clutch settings which make for crisp and accurate use of the screwdriver as they offer perfect torque adjustment. The Dewalt DCF682N1 is in a class of its own. It is the only one on our list that features motion activation technology. This means that you can drive or reverse fasteners simply by twisting your tool to the left or right.

The variable speed of 0-430 RPM is also motion activated. And it comes with a fast-charging dock that allows you to completely recharge your battery in less than one hour. The screwdriver also has a Battery State of Charge display so you know when it’s time to dock your tool for a bit of recharging. When talking about tools that go out of their way to make work easier, it would be a travesty if the SKIL SD561802 isn’t a part of that conversation. We can all agree that different problems require different solutions. That is why this screwdriver comes with a pivot grip handle feature. This means the grip can be adjusted from the standard, gun-like grip and transformed into a straight handle.

It comes with a 4 Volt lithium-ion battery that keeps your screwdriver charged for a significant period of time, after which a recharge will be required once the battery has been tapped out. This can be done easily and conveniently using micro USB. 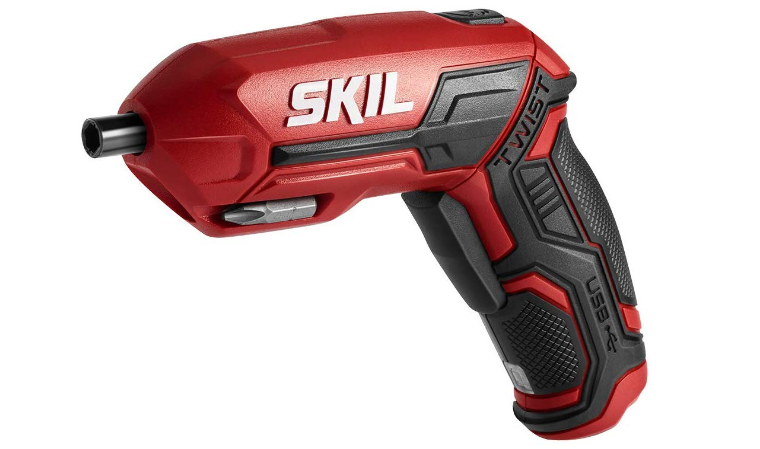 If you’re a power tool kind of guy or gal, then you know that not all cordless screwdrivers are made equal. They come in different sizes, power, torques, speed, and other features. And that makes sense because not everyone has the same needs. So how do you find the perfect one for you? Let’s find out!

How Much Power Should Your Driver have?

Who wouldn’t love to have a powerful tool on their arsenal, right? But not all tasks will benefit from a heavy-duty tool. If you only plan to use your cordless screwdriver for light-duty tasks such as assembling furniture, hanging up pictures, and similar tasks that require you to drive screws into a low-density material (i.e. wood), then a tool with a 3.6V battery should be enough. Some good options in this category would be BLACK+DECKER LI4000 4-Volt Lithium-Ion SmartSelect Screwdriver.

If you plan on doing some light to medium-duty tasks with your cordless screwdriver, you need to get a tool that is more powerful such as the Black & Decker PD600 Pivot Plus (6 volts).

If you want to use it for more heavy-duty applications, screwdrivers that fall between 8 volts to 14.4 volts are your best bet. Some of our recommended cordless screwdrivers in this category include the Milwaukee 2401-22, and the DEWALT DCF610S2.

What about Torque and Speed?

Having multiple torque settings or a clutch system will enable you to have more control over how much torque your driver is using. This prevents damage to your bits, over stripping the screw, or even breaking the screw shaft. A few of our picks such as the Hitachi DB3DL2 and the BLACK+DECKER LI4000 4-Volt Lithium-Ion SmartSelect Screwdriver have clutch systems in place.

Speed, on the other hand, talks about how many rotations the driver can make per minute. For light-duty tasks, a speed of 180 RPMs is good enough. Naturally, the faster your tool rotates, the faster you’ll be able to finish. However, keep in mind that you won’t have any control. The same goes for torque. Choosing a cordless screwdriver that offers variable speed control such the Milwaukee 2401-22 gives you more versatility.

How Maneuverable do You Want Your Screwdriver to be?

An in-line screwdriver is easy enough to operate. But there are times when using one can be a tad awkward like that time you tried to screw something onto your ceiling.

How Efficient is the Battery?

Since you’re going to be operating a cordless screwdriver, its source of power is obviously going to be a battery. And you aren’t going to get any jobs done if your tool’s battery runs out faster than you can say “charge.”

When choosing a model, make sure that you find one using lithium-ion batteries as these have longer battery life. Another thing to consider is recharge time. If recharging the battery will take you forever (a.k.a. 5 hours), you’re going to be better off with a manual screwdriver.

You also might want to check to see if the battery is removable. Because if it isn’t, then you’ll find yourself in the market for a new cordless screwdriver once the battery dies.

Should I be concerned about the Size?

Yes, you should. Because the size of the tool will let you know who long you’ll last… Let’s make it clearer. A bigger tool usually means a more powerful battery, longer battery life, more powerful screwdriver. That’s a good thing. But a bigger tool also means a heavier tool.

If you plan on performing several jobs using your screwdriver, you best be prepared to handle the weight. Because it may not seem heavy at first (just a bit hefty) but it will take its toll on your arm and shoulder after a while.

Of course, there are other features you may want your cordless screwdriver to have such as storage slots for two or more bits, built-in lights, a magnetic tip, etc. But these are more perks than must-haves. Whichever cordless screwdriver you do end up choosing, keep this in mind: your tool is only as good as the one wielding it. Best Stud Finder to Locate Studs Behind Your Drywall Best Pallet Jacks to Make it Easy for You Best Grass Trimmers To Keep Your Lawn Nice And Healthy Best iPhone Projectors – Have a Full-theater Setup Whenever You Want Best Boat Compass to Help Find Your Way Out Sailing

Best Portable Air Compressors For Your Car and Other Inflation Needs